Three groups line up along the baseline. The first player in the group sprints the floor with the ball, pulls up for a shot, rebounds, then sprints back down the other end and shoots, rebounds, and passes to the next player in line. 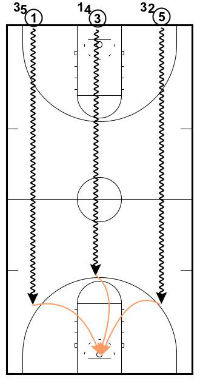 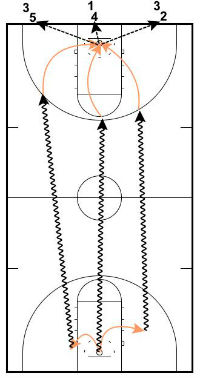 1. On the coaches call, the first player with the ball sprints to the other end of the court with the basketball before pulling up from either behind the three-point line or from mid-range.

2. Upon shooting, the player rebounds their own shot and sprints to the other end before pulling up and shooting again.

3. They then rebound their own shot and pass it to the next person in line. The next person cannot move from the start until they receive the basketball.

4. The next player repeats.

Shooting Distance – If you have a weaker shooting team you can have them pull-up from mid-range instead of the three-point line.