This is a great warm-up and shooting drill especially for youth basketball. It gives players a chance to shoot many repetitions from all different spots on the floor and it’s high intensity with everyone encouraging each other.

• Everyone below the baseline. Half of your team on each side starting just outside the key line extended. Refer to the diagram. 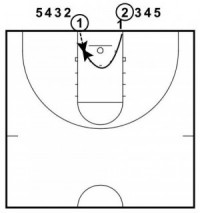 2. The player that passes to the shooter does a half-circle behind the shooter to the other side and receives the pass. Same as the first player, they do a layup, rebound, and then pass to the line they received off. 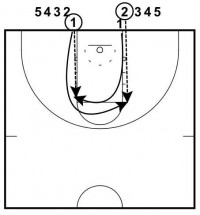 3. This continues until all players have shot a layup from both sides or until you’ve made the required amount of shots.

4. Once completed, they then move onto the next shot. I have 5 different spots my players must all shoot from twice.

Your spots may be different depending on age.
– A layup
– From the block
– From the elbow
– From the 3-point line
– Fake and drive

For this drill the whole team scores as a team. The coach sets a number of makes from each position and the players must count out loud as they make shots.