Off the dribble form shooting

Admin August 19, 2015 Comments Off on Off the dribble form shooting

To teach players to shoot off the dribble using either the 1-2 step or the hop with the correct footwork and while balanced. A great drill for players that are usually off balance when they shoot after dribbling.

1. Players start each rep in the triple threat stance.

2. Players bounce the ball at the same time that they step with the dominant shooting foot (right foot for right handers and left foot for left handers).

1. Players start each rep in the triple threat stance.

2. Players bounce the ball at the same time that they step with either foot (personal preference).

3. They then push off the foot they stepped with into a small hop and land with both feet at the same time before raising up for the shot. 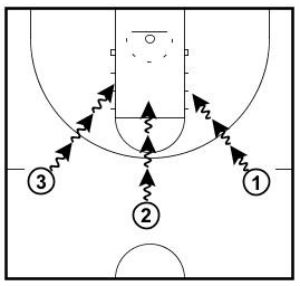 1. The first thing you must do is show the players the correct footwork to use using the form instructions above.

2. The first player in each line practices the form 3 times. The first two times end in a pump fake and the third time ends in a jump shot.

3. After receiving your own rebound join another line.

Add More Lines – If you’ve got a large amount of players you can add more lines so that players can have more repetitions. Try not to have too many though because it makes it hard for the coaches to watch and make corrections to form.

Use the Hop or the 1-2 Step – Teach the players how to shoot using both and then I’m of the mindset that you should let each individual player decide which one feels more comfortable to them.