Give and Go Shooting Drill

Admin August 19, 2015 Comments Off on Give and Go Shooting Drill

Players weave in and out of the cones, pass to the coach, receive the ball back, and then shoot a variety of shots off the catch switching sides each time they shoot.

A great drill to work on dribbling skills, footwork off the catch, and a variety of shots. 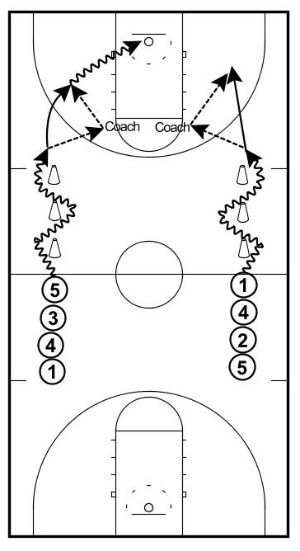 1. The coach must first tell the players which shot type they’re going to work on first.

2. On the coaches call to start, the first player starts weaving in and out of the cones.

3. At the end of the dribbling the player either makes a two-handed chest pass to the coach or a 1-handed push pass depending on age and skill level.

4. The coach catches and passes back to the first player who then performs the chosen shot.

5. As soon as the coach has passed to the player the next person in line starts dribbling.

6. After the shot the player rebounds their own shot and dribbles up the opposite sideline to join the opposite line.

No Dribbling Cones – If you simply want to focus on the footwork part of the drill then you can take out the cones.

Use the Full Court – If you have 4 coaches (or parents) you can increase the number of shots each player will get by running 4 stations instead of two. Have the players rotate clockwise each time they shoot.