Admin August 19, 2015 Comments Off on Chase Down Layups – Shooting Drill

Two lines of players on the baseline at each end of the court. The offensive player starts with an advantage and sprints the court and must lay the ball up while under pressure from the defensive player.

To teach players layups at full speed while under pressure from a defender. Also works on chase-down defense. 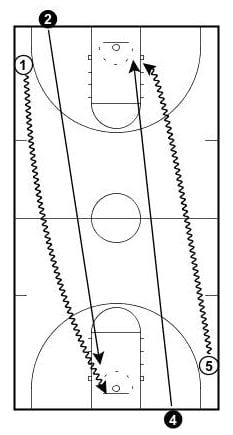 1. Coach starts by bringing the offensive player out a few steps depending on how fast they are compared to the defense to give them the fast break advantage.

2. On the coach’s call, the offensive and defensive player sprint the floor.

4. After the make or miss, both players join the end of the lines at their current end of the floor.

We usually don’t keep score in this drill but if you want to you can create a competitive scoring environment, you can by playing until a player makes a certain amount of layups.

Opposite Side of the Floor – Perform the drill from the other side of the floor so that the players have to dribble and make a layup with their left hand.