All players grab a basketball and line up behind the same cone. Each player takes four different shots from 5 different cones. The core four shots are two layups and two jump shots.

A great drill for practicing a variety of shots from all over the floor. While I’m usually against lines, this drill moves quite fast and the players will never be standing for too long.

1. All players are in the same line on a baseline cone.

2. If the coach decides to start with a floater, the first player in the line will take a few dribbles in, take a floater, and make or miss will join the next cone. 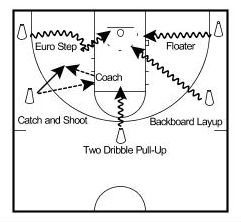 3. As soon as the first player in line shoots the ball, the next player starts dribbling in. This continues until all players have taken a shot from the first cone.

4. When the last person is finished the first cone, the first player in line on the second cone will repeat what they did on the previous cone. This continues until everyone has shot from all the cones.

5. The players end up on the first cone again, the coach picks the new shot, and the same routine happens. Do this for all four different shots.

Add Different Shots – The four I mentioned at the start are the staples we use every time in this drill. But if you’d like you can add the different shots like the euro step, a three-point shot, a reverse layup, a power layup, etc.

All Shots on Same Cone – Instead of the players rotating straight onto the next cone, if you’d like they can just join the end of the same line and go through all the different shots before moving to the next cone.